Tesla is a Battery Company

Tesla Motors started as a Car company, but they should now be considered to be a Battery company for three key reasons: 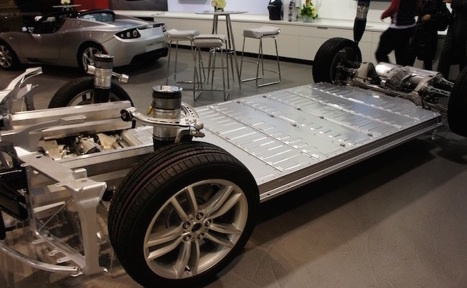 The careers of Tesla founders Martin Eberhard and Marc Tarpenning have been largely focused on Battery technology. Their first company together NuvoMedia, which built an eBook reader called the Rocket eBook in the late 90s, was a bet that as battery technology improved eBook readers would become much more feasible. They sold the company in 2000 for $187 million.

This sale would provide the funding necessary for Eberhard to explore the electric car market, another product space that had potential to be deeply changed by improvements in battery technology. Eberhard and Tarpenning planned to build a two-seater sports car with an induction motor powered by lithium-ion batteries. This became the Tesla Roadster.

Eberhard and Tarpenning originally planned to outsource much of the frame and other auto components of the car, using the Lotus Elise vehicle as a base. As planned, Tesla would supply batteries and power train assemblies, while Lotus would be responsible for the chassis and other components such as wheels and shocks. In the end, Tesla took on many more subassemblies than originally planned, but their battery and EV power-train technologies are still their most important components.

The CTO of Tesla, JB Straubel, also has deep expertise in energy systems, with a B.S. and M.S. in Energy Engineering from Stanford. Straubel is my pick as most likely to takeover when Elon Musk resigns as CEO in a few years.

EDIT Thanks to HackerNews for pointing out that Elon Musk was on track to study high-energy-density capacitors at Stanford, but dropped out to start Zip2.

A Battery on Wheels #

The answer is that Tesla doesn’t need to compete directly, because they’re not playing the same game.

In an ICE-centered automotive world, the engine is the most complicated and important component. As a result of the complexity of ICE engines, most modern car companies maintain ownership of engine design and manufacturing, marketing and branding, sales channels (via their own dealers), and final assembly, but outsource almost all other components of the car.

Electric motors are much simpler than their ICE counterparts. Some estimates place the number of components on an ICE engine at 200+ (including pistons, spark plugs, belts, coils and more), compared to less than 10 on a comparable electric motor. This comparison is a little over-simplified, but the point still stands: electric vehicles are much less complicated than their Internal Combustion Engine counterparts.

In an EV centered world, energy storage is the most complicated problem, and battery technology takes center stage. Tesla has developed significant expertise in the battery space while building their cars, and they can now leverage this expertise to enter other battery-dependent markets.

Electric Vehicles are only one piece of a much larger shift in energy usage and generation. A distributed energy future is coming.

Today most consumers have only one choice of how to get their energy – a single regional power utility company. In much of California, that’s PG&E. In the NY Metro area, it’s Con Edison. In the Carolinas, it’s Duke Energy. Because of technology advances of the last few decades, in the near future the power utility company will be only one among many energy source choices.

Batteries, on wheels or stationary at the home/office, will play a key role in this ecosystem by serving as the connecting piece between multiple energy generation sources.

Home batteries can recharge nightly during the lowest-demand, lowest-price periods. Then, during the day, a home might run solely from battery power and rooftop solar. If there is an excess of energy available on the battery, the homeowner might even sell some energy back to the grid. The homeowner’s electric vehicle (battery on wheels) also charges overnight, and could sell some excess energy back onto the grid during peak energy usage periods while plugged in at the office.

This is the future Tesla is preparing for with their battery-building Gigafactory. Once fully operational, this single factory in Nevada will produce more lithium-ion batteries in one year than the entire global production in 2013 (across all lithium-ion factories, all companies).

Tesla is maneuvering to dominate the global Battery market. Tesla CTO JB Straubel, during a keynote presentation at the 2014 Energy Storage Symposium, makes it very clear what direction Tesla is headed in:

Founders Must Be Rooted

Paul Graham claims that 20% of companies YC has funded have had a cofounder leave. That is an enormous number. One in five. If we’re entering the Age of the Cockroach, we need more rooted Founders. For Founders: How rooted are you? Do... Continue →